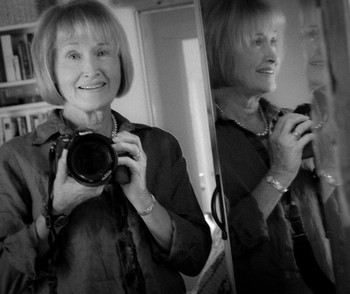 Photography is a language for me, a way of telling what I see. The challenge is to convey meaning using light, form, shape, gesture, and of course, content. Often this process is intuitive, a search for something that is essentially inexpressible in words. As an early photography mentor, Kate Carter, often said, quoting Robert Frost, "We all sit in a circle and suppose. The secret sits in the center and knows."

I photograph many different subjects but the ones that draw me back repeatedly have a common theme of disruption – forest fires, revolutions, and recently, climate change. I’m drawn to the aftermath of upheaval, be it environmental or social, momentary or spread over millennia.

I’m fortunate to live in New Mexico, a living tableau of upheaval in its volcano-derived geology, frequent massive forest fires, and increasing drought. Here the land is constantly recovering from something.

That same curiosity about the marks of disruptive change took me to Cuba several times to photograph the aftermath of a revolution now more than fifty years past. I found the richest evidence in the personal spaces that Cubans are able to fashion in a collective society on the cusp of change.

One-seed juniper trees, Juniperus monosperma, have covered much of the American southwest for thousands of years. They are so common we barely notice them except in their abundance. Some research ecologists now think that prolonged drought and rising temperatures could be a fatal combination for junipers at the driest edges of their distribution, where their natural responses to heat and drought could kill them.

Juniper Futures, my project, while I was an artist-in-residence at Bandelier National Monument in 2015, was inspired by reflecting on the mortality of seemingly healthy junipers in the park.

The Green Fuse: A Forest After a Fire

New Mexico, where I live, is afflicted by large and frequent forest fires. The Las Conchas fire of 2011 consumed 150,000 acres in the Jemez Mountains and burned for over 30 days. The power of the fire was impossible to ignore and after the fire, up close in the forest, the signs of its impact were equally powerful. Whole mountainsides were changed into standing charcoal while others were selectively singed. The color palate, the piney forest smell, and the cycle of nature were wholly altered.

After the fire was contained and the first rain fell, signs of renewal began to appear immediately. I began documenting that renewal in 2011 by going deep into the forests of the Jemez Mountains to search for new growth.


Cuba on the Cusp

Curiosity drew me to Cuba. As Cuba’s history unfolded just 90 miles from the U.S. but behind a barrier few Americans could cross, Castro told one story while Cuban exiles told another. Somewhere between their embroidered memories and his exuberant promises lay a truth waiting to be discovered.

Historians sort through the past for clues to what has unfolded. Artists look in the present for clues to what will unfold. My photographs taken in Havana between 2010 and 2014 show a culture in transition from socialism to something not yet defined but clearly hinted at throughout Havana. In her crumbing architecture and cramped living quarters are signs of reversal and change, signs that space, even when held in common, must still be made personal.

Havana is a place where relationships, more than things, define a person, but where cherished personal possessions still matter, and people are proud to open their homes to a foreign artist in search of their reality. In many Cubans today is a cautious willingness to hope, to engage, to reveal. And as restrictions on commerce ease, many are testing the waters of entrepreneurship. New relations with the U.S. will push these boundaries even further.

The Fence, outdoor group show in the Santa Fe Railyard, 2016

The Green Fuse, catalog of the solo show at Photo-Eye Bookstore, October 2013. Blurb,